The latest TransUnion Vehicle Pricing Index (VPI) indicates an unusual trend that used car prices are tracking new car prices, indicative of a slight softening of the used car market relative to new vehicles. In addition, for the fourth consecutive quarter, used car inflation has increased on a year-on-year basis, rising by 1.36% between Q4 2013 and Q4 2014. From 2012 to 2013, the used market experienced five straight quarters of year-on-year price deflation.

“Historically, used car price trends tend to lag behind those of new cars, generally seeing an increase in pricing only a few months following new car pricing inflation. However, for the past couple of months we have seen used car pricing trends keeping pace with new, rising almost simultaneously. We have also seen a slight decline in the number of used vehicles sold relative to new cars during this quarter,” says Keith Dye, CEO of TransUnion Auto Information Solutions. 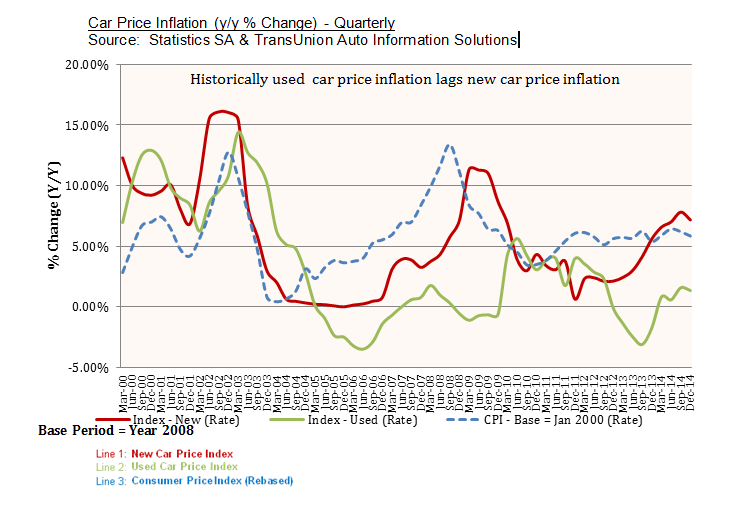 According to TransUnion’s records of financial registrations, the trend towards purchasing used rather than new vehicles, which emerged in the first quarter of 2014 and continued into Q3, has started to reverse again in Q4. The ratio of used to new vehicles declined from 1.79 to 1 in Q3, down to 1.81 to 1 during the final quarter of 2014. This ratio, however, has not yet reached the lows of 1.65 as in Q2, 1.52 in Q1 and 1.25 at the end of December 2013.

“This decline is not material and may be affected by the purchasing patterns of car rental organisations, which tend to re-fleet their operations during the last quarter of the year, inflating the number of new cars sold relative to used cars. The price indices graph also shows a small decline year-on-year from an inflationary point of view; however, this change is also minimal and can mostly be attributed to a degree of stability in foreign exchange rates over the period. As a result, pricing has remained fairly static,” Dye adds.

Used car inflation is still surpassed by the rise in new car prices, which once again outpaced the Consumer Price Index (CPI). At 7.18%, this figure significantly reduced over Q3, where the rate rose as high as 7.82%. This represents the first downward trend after four consecutive quarters of year-on-year new vehicle price inflation.

Furthermore, Rudolf Mahoney, head of research and PR at WesBank says, “Increases in new car prices continue to exceed headline CPI. This has resulted in a significant price gap between new and used cars, with more consumers opting to finance used cars.”

WesBank noted that the ratio of used to new cars that it has financed has moved from 1.12:1 in September 2012 to 1.44:1 in December 2014, indicating a 23% growth in favour of used vehicles over the long term. Negotiating difficult economic times, consumers also continue to use the structure of the finance agreements, such as longer repayment terms and balloon payments, in order to keep monthly repayments at affordable levels.

“The recent, sharp drop in fuel price offers welcome relief for consumers, while the prevailing low interest rate provides a level of certainty and confidence. This is reflected in the vehicle replacement cycle, which has remained consistent at 36 months for the last year,” said Mahoney.

“The TransUnion VPI report indicates that new car price inflation seems to be flattening out, and the market can look forward to price stability in 2015. However, the performance of the rand, and all associated factors, remain a risk,”

The rate of new car price inflation has continued to slow as a result of a more stable exchange rate, but the fact that this figure remains above the CPI shows an economy that is still beset by challenges, lowering demand for both new and used vehicles. Fluctuating exchange rates will continue to have the greatest impact on pricing and ultimately the market in 2015.

“Statistically, this has not been a significant or dramatic quarter in terms of the VPI. While the relative increase in new car values may be indicative of a softening of the used car market, none of the trends that we are currently seeing represent dramatic changes or shifts and are not currently cause for concern,” Dye concludes.

*TransUnion publishes the VPI on a quarterly basis. The vehicle risk intelligence company calculates the VPI from data it receives on monthly sales returns from a large number of dealers throughout the country, as well as vehicle financing registrations from all of the major banks and vehicle finance houses.

*WesBank confirms our views except the pricing ratios. Materially affected by the credit view.

A basket of new cars was selected by determining their sales volumes in the market. If a car is discontinued, it will be replaced by its new model.

A basket of used cars was selected by taking the previous year models of all new cars included in the new basket.

Are you a consumer looking for information about your personal credit report?

I want to talk to you about business solutions